When I arrived in the USA in May 2018, I was surprised because I could not talk with anyone except my wife. I was in New York’s airport, and I had to check in for my next flight to Chicago. Someone who works in the airport helped me in a difficult way, which was with gestures and google translator. After that, I was hungry, but I was afraid to use my weak English in front of anyone, so I did not eat anything while I was waiting for five hours. Then, I arrived at Chicago’s airport, and I walked into a restaurant area. I saw one restaurant that I knew. Yes, McDonald’s, I was very happy because I knew my order. Yet, the menu is not like the menu that I knew in Saudi Arabia. Again, I used my weak English, and I got a different order. I ordered a chicken burger, but the person who took my order heard cheeseburger. I ate and did not return the wrong order. Thus, speech is an important way to communicate among people.

I chose to learn English because it is one of the most used languages in the world. Furthermore, I am preparing to study English in a country where the native language is English. I have been using an efficient way to increase my learning of English in several ways: studying in the Intensive English Program (IEP) and practicing English in public areas. I searched for weeks on the internet to find an appropriate English school. Then, I selected the state, Missouri,and city, Columbia, and I came to study English in the Intensive English Program. I have talked to the IEP instructors during my free time, and they give me effective advice. These days, I can talk more confidently everywhere in the USA, and I can return my order in a restaurant if it is wrong. 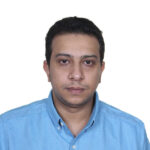 My name is Ali Al-Esmail, and I am from Saudi Arabia where I studied at Taif University in the Faculty of Medical Sciences. My major was in Physical Therapy. I also worked for five years in Saudi Arabia in one of the largest hospitals followed by the Ministry of Health. After that, I decided to study my Master’s degree in Physical Therapy in the United States of America, so I am learning English as a second language to develop my English to enroll in a university in the United States of America.